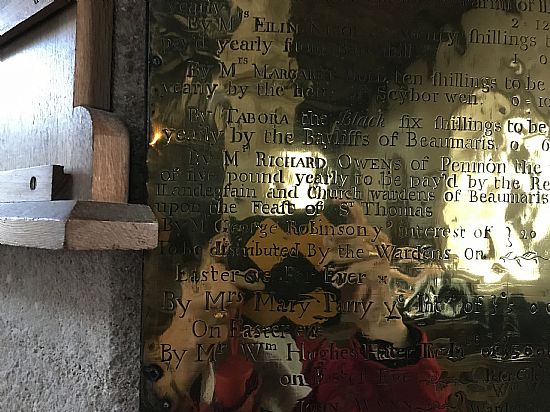 This project was originally called the Black Boys Project, until we discovered the story of "Tabora the Black", who lived with her son in Beaumaris and who made a significant donation of Six Shillings to be paid yearly to the poor of the parish by the Bayliffs of Beaumaris.

This is recorded on a brass plaque in Beaumaris Parish Church:

We have also been working with Maggie Ogunbanwo, to explore the wider stories Africans, often children, who were brought to England and Wales in the 1700s mainly to work in stately homes.

We are starting with some research into the story of Jack Ystymllyn, who was brought to North Wales as a child, and worked in a family household near Criccieth, before marrying and having his own family.

We have previously done some research on George Africanus who worked for the Molineux Family in Wolverhampton, and work closely with the Belong Team in Nottingham who did further research on his history as an adult.